We are a SOLUTION BASED professional development organization.  We understand there are many stakeholders in the animal welfare and animal-based industries.  We work to provide effective solutions for the betterment of all and enjoy a productive working relationship with many of these stakeholders. 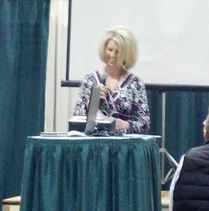 Ms. Shelly, speaking at the Horse World Expo - Harrisburg, PA
HOW IT ALL STARTED

​The founder and owner of the PA Academy of Animal Care and Control (PAACC) is Ms. Colleen Shelly.  She is a graduate of West Chester University with a B.S. in Criminal Justice and a minor in Political Science. She retired honorably from the Pennsylvania State Police in 2013 with the rank of Trooper First Class.


​During her years as a PA State Trooper, she dedicated much of her career to animal crimes and animal law issues, after identifying an education gap in this area of law enforcement.  She served in the Patrol and Criminal Investigation Units in Troop K, Philadelphia, as a Criminal Law Instructor and member of the Tactical Mounted Unit in the Bureau of Training and Education, and most recently as PSP's first Animal Crimes Investigator, a position within the Bureau of Criminal Investigation/Special Investigations Division. During her tenure with the Pennsylvania State Police, she developed the Basic Animal Cruelty and Animal Law course offered to federal, state, and municipal police officers. Ms. Shelly was the pioneer of bringing awareness to animal cruelty investigation and response by the Pennsylvania State Police before passing the torch and moving into the private sector. She was instrumental in changing the way animal cruelty and Dog Law complaints are viewed by many police departments across the Commonwealth of Pennsylvania.

Originally known as the Animal Crime Institute, the PAACC is the ever-growing vision to bring increased education and professionalism to the response to animal incidents and the humane care of animals in a responsible manner.